Did you know there was a secret language made up by musical composers?  There has been evidence of this musical code from as early as the 1400s.  It has been called many things throughout history, and is most commonly referred to as a "Musical Cryptogram", although it's hardly common at all.  The first evidence we have of these secret messages was found in the work of Josquin des Prez, a French composer from the high Renaissance. 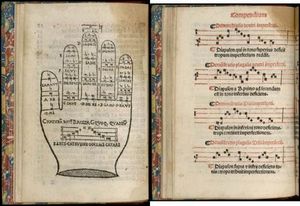 Josquin based his word interpretations on the vowel sounds of the earliest form of solfège, created by Guido d'Arezzo.  Without going into too much detail, the Guidonian hand was a learning mechanism used to help remember how to read and sing chant.  The detail of the drawings that remain of the Guidonian hand remind me so much of palmistry.  The nature of a musical cryptogram, interpreting a word or name through musical meaning felt very much like divination to me.  For this reason, when I started writing my own musical cryptograms, I decided to start calling them musical readings.  To me, the musical reading is much more than just notes hidden within in a piece.  It takes quite a bit of interpretation besides just the literal reading of the letters in order to create a successful musical reading, and tells a little bit about a person through the reading of their Family and Given names.

The musical cryptogram was practiced and developed more in the Romantic era, and went through many interpretations, but I use the French method of reading.  This form respells a name into musical language by using the letters A-G.  Essentially, any letter that isn't A-G, is recycled through the musical alphabet until it is.  For example, H becomes A, I becomes B and so on. 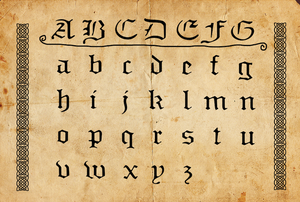 One of the first pieces that I wrote came to me after I visited a beautiful orchid greenhouse.  I wanted to capture the spirit the greenhouse, but also do a literal interpretation of the word orchid to really embody the meaning behind the word.  Respelled musically, the word "orchid" is ADCABD.  After taking that, the next thing that I added was register, meter, rhythm, and a key.  In order to give this a more uplifting mood, I decided to change the key to D major, changing the C to C-sharp.  Instead of making this a main-theme, I wove it through most of the piece as the back bone on which the melody was built.

I have done several readings that involve either someone's three names (First, Middle, Last), or the weaving of two names for a ceremony such as a wedding.  The most recent piece that I have written was a giveaway that I offered on Instagram for hitting three thousand followers.  In this instance, as in other readings I have done, I interpreted the girl's three names (family, middle, and given) interwoven together as an entire piece.  I love doing these readings for names because it can give you insight and meaning behind the names.  Her family name was very interesting to me because respelled, it came out as DAGDA, which in Irish mythology was the father god, king, and druid, as well as the chief of the Tuatha dé Danann.

There are many other interesting things that I found by weaving the melody of her name, but I will send those directly to her.  Hope you enjoy the musical interpretation of her name, and that you've learned a little about musical readings.  If you are a musician, you should give it a try!  What does your name sound like??