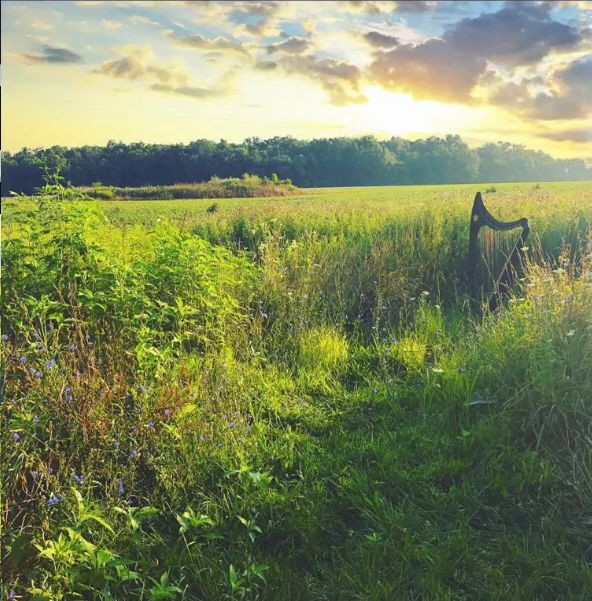 If you haven’t met me before, I’m Maevyn (rhymes with Raven), and I wholeheartedly believe in the reconnection of music with nature. I feel that we as a society have really lost touch with nature as we have become more modernized, and that we need to go back into nature to center ourselves and find peace and inspiration. Several years ago, I decided to take my harp outside to play and discovered not only a feeling of deep reverence and connection with nature, but also had the wonderful surprise to hear my harp strings sing of their own accord when the wind blew through them!

After doing a bit of studying, I saw that this is actually described in several Celtic myths. There is an Irish myth tells the tale of a woman who has an argument with her husband, goes for a walk on the shore and happens to hear beautiful music singing on the wind. She is lulled to sleep by the sound, and when she wakes in the morning, she sees that the sound was made from the wind blowing through the sinew strings of a partially rotted whale on the seashore. From this, she creates the first harp.

There is also a tale of a magical harp that sings of it’s own accord, as well as the Greek myth of the singing harp. It is said that Aeolus, the keeper of winds, had a harp that was played by the wind alone. That is why the harp that plays on its own is sometimes called the Aeolian harp.

When I heard this phenomenon, I was astounded and completely entranced. It has such an ethereal, magickal sound, that you really have to hear it in person in order to get the full experience of it. After this occasion, I decided to play out in nature more, and made it a regular thing, playing every morning outdoors as the sun rose. It created wonders for me as a meditation and centering, grounding for the rest of my day.

As a classically trained musician, we were trained to play inside in practice rooms, in our house, and in beautiful performance halls. While all of those can be nice, there is nothing more thrilling and spiritual to me then taking my instrument outdoors to reconnect with nature. After all, most of it’s parts were taken from nature: the wood in the body and the sheep gut strings that are similar to the original whale sinew from the Celtic myth.

If you are a musician, I encourage you try taking your instrument out in nature and performing in a garden, a forest, by a waterfall, on a mountainside, or your own backyard, even if it is just singing outside. If you’re not a musician, I encourage you to take a walk outside and reconnect with mother earth. May you feel the connection that I experience when reconnecting with her.